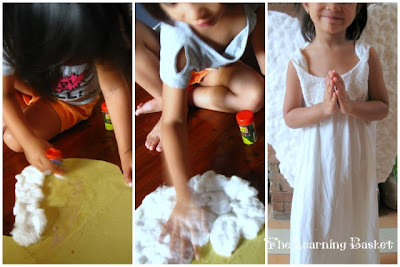 Prayer for a Child by Rachel Field is a beautiful prayer asking God to bless all the familiar people and things in a child’s life; it is wonderfully illustrated. Being a prayer, nothing “happens” in the book. Little T did not appreciate it at first and kept asking for another book to read. Fortunately, Before Five in a Row (BFIAR) has engaging ideas that I again tweaked to make it our own learning experience.
GEOGRAPHY I hooked Little T with the page depicting children of different nationalities. As suggested by BFIAR, I introduced the song Jesus Loves the Little Children, and we have been singing it since. I also borrowed from my sister a memory matching game called I Never Forget A Face that has pictures of children from all over the world. We looked at the pictures and noticed how the children are dressed. It was perfect timing that Little T’s Angkong (grandfather) gave her an inflatable globe so we also looked for the country each child in the cards comes from. The objective was just to introduce to Little T the concept that there are other places in the world apart from where we are, the .
ANGELS Beautifully drawn angels are to be found in every page of the book. Little T and I played our favorite I Spy Around the House for exploration and looked at and talked about the different angel figurines. She was delighted to see one with fluffy wings, so I decided to make angel wings for her with cardboard, glue, and lots and lots of cotton balls. I put two strings so she can wear it like a knapsack. It was a fun craft project that allowed us to practice gluing and a great addition to our Dress Up Box to boot. Little T was excited to show off her wings to her friend J and flapped her arms like a… butterfly.
PRAYER Prayer for a Child introduces a simple pattern for a prayer, starting each verse with the word Bless. Little T’s Angkong’s birthday happened to fall on the Friday that we were reading the book and we made a special prayer just for him! He was very happy with Little T’s gift!
We love making books and here is how we made this one:

POETRY Poems bring to mind dreaded class recitations! Any attempt at enjoyment disappeared with the pressure to memorize, memorize, memorize. I included in our Learning Basket A Child’s by Robert Louis Stevenson, and Poems and Prayers for the Very Young selected and illustrated by Martha Alexander to go along with the “rhyming couplets” (BFIAR) of Prayer for a Child. Little T was sick during the week and we read several poems from the two books in bed. With no pressure to memorize or perform, Little T and I both enjoyed the rhythm and rhyme of the poems while relaxing ourselves to sleep. It’s a memory that I’m glad to replace the ones from my school days!