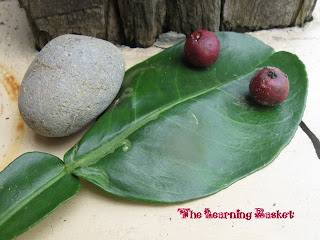 I found another Caldecott Medal treasure in my favorite used bookstore Books for Less: Sylvester and the Magic Pebble. I did not have any idea about the story, but I was in a hurry, the pictures were beautiful, and the author seemed familiar. Well, it turned out William Steig was also the author of Pete’s a Pizza, a book that Little T and I recently enjoyed. Sylvester is a young donkey who found a red pebble that made his wishes immediately come true as long as he was holding it. On his way home, he panicked upon seeing a lion and wished himself to be a rock. The story of his parents’ diminishing hope of ever finding him again is poignant and a bit intense for young children. It is definitely a book that we will come back to for deeper discussions, as we only tackled its surface.
ROCK PAINTING Tying up Sylvester’s penchant for collecting rocks with Little T’s “homework” in Kindermusik to collect nature treasures, we went around the garden picking up rocks, leaves, twigs, and aratiles (Jamaican cherry in English). Once we had our loot, Little T set off to paint the rocks red like the magic pebble. Of course, she chose another color and insisted to paint the leaves too for some natural stamping. 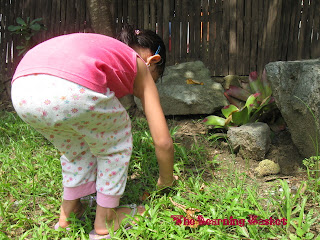 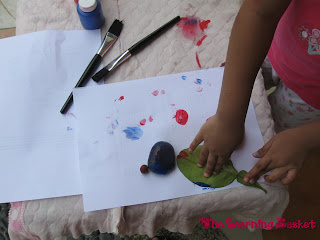 SEASONS Sylvester stayed a rock for a looong time because the magic pebble was out of his reach. The book shows the passing of the seasons, which Little T is familiar with. We talked about how in other parts of the world there’s winter, spring, and autumn, while we only have summer and rainy days in the .
MISSING CHILD Sylvester was a missing child, and Little T and I talked about getting lost. I took this as an opportunity to remind her of our rules on safety such as staying with us when we are out and never talking to and going with strangers.
KISS WISH We made up a game called Kiss Wish inspired by the magical property of Sylvester’s red pebble. Here’s how we play it: I say out loud “I wish Little T would kiss me.” Little T kisses me if she sees that I’m holding our designated pebble and just grins when I’m not. Of course we take turns as the wish-maker and get to give and receive kisses throughout the whole game. Try it!
MUSIC As we picked up rocks, twigs, and leaves from the garden, we sang and hummed In My Pocket, a song from Kindermusik’s See What I Saw: Put a (leaf, twig, rock, aratiles) in my pocket, hmm hmm hmmm. I really must write about Kindermusik and how a great supplement it is to preschool homeschool!
Make magic!
mariel