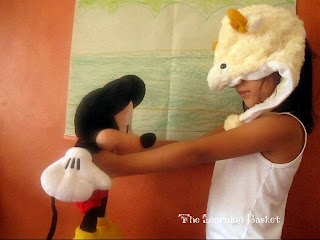 I don’t like stuffed toys. They gather dust, take up space, and get played with for just about two minutes. Without buying a single stuffed animal though, we still managed to accumulate a menagerie! We got to put them into good use when we put up a show based on the charming book Ask Mr. Bear by Marjorie Flack. Another extremely fun idea from Before Five in a Row!

THE SCRIPT     Ask Mr. Bear lends itself well as a script with its simple story and repetitive lines. It is about a little boy named Danny who is looking for the perfect gift for his mother’s birthday. Several animals offered to give him their produce: the hen an egg, the goose some feathers for a pillow, the goat some milk for cheese, the sheep some wool for a blanket, and the cow some milk. Danny, though, was only happy with Mr. Bear’s whispered suggestion – a big birthday bear hug!

BACKDROP     For art, we made two simple backdrops based on the book – the grassy area where all conversations are held and the woods where Mr. Bear lives. Here’s Danny at the middle, thinking of the perfect gift for his mother. 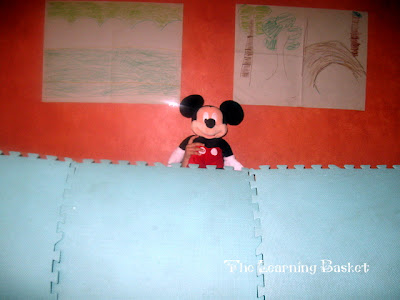 VOICES     We took turns being the narrator, Danny, and the animals. We made such fun memories like the one of Little T bleating Mrs. Sheep’s lines: “Whaaat caaan youuu giiiive meeee foooor myyyy motheeeer’s birthdaaaaay?” and Mr. Bear’s growly whisper. 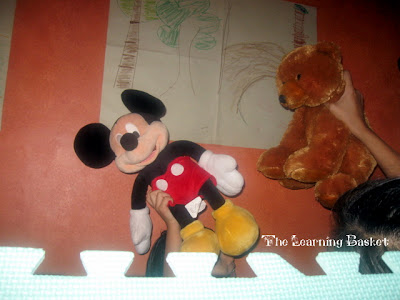 SOUND EFFECTS     The narrator also acted as the sound effects man, beating the drum in keeping with the actions: walk, skip, hop, gallop, and trot.

AUDIENCE    What’s a play without an audience? Baby Boy rewarded our efforts with squeals and attempts at saying “Moooooo!”


With a little planning and guidance, children can learn so much and build their theater skills from a simple puppet show right at home. They can do art, memorize lines, do voices, and depending on the book being staged, learn a little science along the way. So, no matter how dusty our stuffed animal friends may be, I just might keep them for a little while longer.