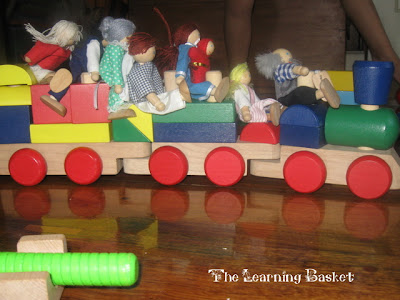 There’s nothing like wooden blocks to make a child’s imagination flourish. Our blocks have been roads, bridges, castles, a piano, and most recently, a train track.

When I put The Little Engine That Could by Watty Piper on our shelf, Little T immediately wanted to “study” it. So, I put it in our Learning Basket together with:

TRAIN TRACKS     I was thinking of borrowing one of my nephew’s train sets, but I remembered my fellow homeschooling mom Teacher Mama Tina’s blog post about making their own train tracks and I knew that we could do it too. We assembled our wooden blocks for our train tracks, added rhythm sticks for gates, Little T’s dresser for a tunnel, a wooden dollhouse for the train station, and wooden dolls for passengers. We added a tree and a rainbow, and used our legs and bodies as tunnels too! 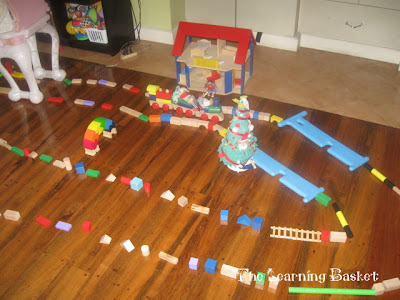 MUSIC     While we were building our train track, we sang I’ve Been Working on the Railroad and the other train songs in our Kindermusik CD. We then took turns being the train engineer and the sound effects person playing with the egg shakers for the train’s “chug-chug” sound and the flute for “toot toot!” 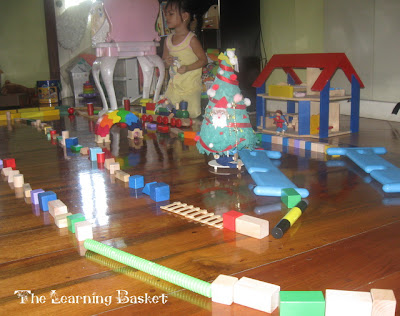 STORY     Little T then made up her own story of people climbing in and out of the train and resting under the tree, and of the train stopping to let a car pass through and going through tunnels.


It was a lovely week that again showed us the possibilities of wooden blocks, the ultimate open-ended toy!